In the beginning, research on deep seawater in Toyama Prefecture was once part of the Research for the Development Effective Technology for the Use of Marine Deep Sea Resources, which was conducted by the Science and Technology Agency (currently the Ministry of Education, Culture, Sports, Science and Technology) from 1986 to 1991.

During this research, Toyama Bay was selected as the location for the establishment of a floating deep seawater effective usage system. The project gave birth to the world’s first self-powered floating deep seawater usage device “Hoyo”. An experiment to bring the inorganic nutrient rich deep seawater to the surface and thus fertilize the sea region was simultaneously conducted.

As a result of a survey conducted in 1990 on the potential usability of deep seawater and on-land pumping, Toyama Prefecture became confident that the extraction of deep seawater from areas ranging from central to east Toyama would be relatively simple and that there would be a great future in the development of technologies for the cultivation of cold and deep water marine organisms.

In 1991, the Survey to Create the Fisheries Industry Practical Application Research Facility Utilizing Japan Sea Proper Water Fundamental Plan was conducted. From the perspectives of the promotion of fishery industry experimental research and the securing of both surface seawater and ground water, the result of this survey determined that pumping of deep seawater at the Prefectural Fisheries Research Institute would be the most preferable.

All of this, and the current deep seawater utilization research facilities , was made possible through the joint support of Fisheries Agency and Marine Forum 21, Inc. from 1992-1994. 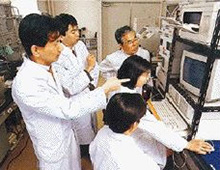 Research at the Prefectural Biotechnology Center

Use of deep seawater has penetrated into numerous fields ranging from foods to medicines and health products. Toyama Prefecture’s experimental research institutes, in cooperation with national research institutes, universities, and private corporations are actively involved in the study of the practical application of deep seawater to non-fishery fields.

In particular, Kosinostatin and Arisostatin, anticancer antibiotics have been discovered from microorganisms isolated from deep seawater samples. This discovery has launched research into deep seawater as a potential source for bioactive substances.